Memories of travel leave an indelible mark and through the prism of time carry even greater meaning. “My eyes streamed, my coat still has burn marks and the stench of smoke stayed in my nostrils for weeks.” Award winning LS/FF alumni Chris McClean is recalling shooting Las Luminarias festival in Spain, the inspiration behind Horses, the latest single from CJ Mirra’s album Translate.

Released this autumn, Translate is the official soundtrack to the acclaimed audio-visual freesurfing experiment and film of the same name, the latest collaboration with the award winning Director. Four years in the making, Translate is an ode to the raging North Atlantic in all its guises, a love letter to Europe, the landscapes, the rituals, surfers and communities that call these shores home.

“We shot this for Translate in 2016 in San Bartolome de Pinares during the annual festival which sees horses ridden through bonfires in the streets. I was there to document the ancient tradition originally intended to purify villagers from the plague and protect the animals for the year ahead,” says Chris of the video he directed for Horses. “Four years later the symbolism of this ritual, set to music with lyrics such as; “I can smell the campfires burning/ But I’ll go out walking on my own/ By day and night the world keeps turning/ Frightened people hiding in their homes”, is unnerving and comes back to the film’s central idea of relating to the strange(r) times we live in today.”

“Horses, written by Will Oldham is one of my favourite songs,” says CJ Mirra. “I’d shared the track with Chris years ago and when he came back from filming in Spain, he wanted to record a version for the film. I recorded a slow, dark, stripped back arrangement. When we started rehearsals for the live a/v show, the band added extra colour and energy that worked so well that we recorded a new version for the soundtrack with Lee-Ann Curren on backing vocals, Oliver Davies on drums and Andrea Balency on piano. There’s also sounds of a burnt out, abandoned piano that Chris found. He recorded himself playing it and sent it to me. The symbolism and the sound felt perfect, so he is featured on the music for this piece too.”

“As the sun set, piles of pines were set alight and dramatic scenes unfolded,” recalls Chris. “More and more horses and riders appeared, galloping through the streets, billowing smoke and sparks hanging in the air, flames licking the horses heels. The more daring riders charged through the pyres at full pelt scattering glowing embers, cinders and ashes. Watching this back gives me a longing for the rough and tumble of shooting something quite wild and unruly.”

Translate is released on The State51 Conspiracy 27th November 2020  HERE as digital download. The super limited edition lathe-cut vinyl created by The State51 Atelier is available for pre-order HERE.

Translate had it’s premiere at LS/FF  and the award winning live A/V experience is due to resume touring in 2021. 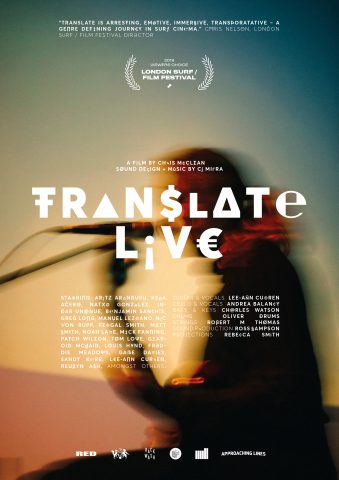